South Africa, land of my birth, has continually inspired my work. The landscape, people, histories, myths and legends are never-ending sources for my images. Born in the Free State on the border with Lesotho, my childhood among very different cultures, may have provided the lasting sense of living on a cultural boundary which always vitalized my work. Hermanus, where I now live and work, is wedged between the Indian Ocean and the mountains of the Western Cape.

Descended from ancestors who came to Africa from Europe in 1688, I appreciate the experience of living in both worlds. A stay of four years in Germany during the early 80’s stimulated my European roots which lead to a focus on the French Huguenot settlers. The Vanitas still life series (1987), comprising objects they brought with them interspersed with objects made by indigenous people is an example.The North-South Heartbeat series (2002) again combined images from both worlds. The caves around the village where I was born abound with ancient rock paintings by the San – the earliest inhabitants. The dual role of the San painter and shaman constitutes another recurring theme: Night of the Shamans (2002) and The Procession (2010). 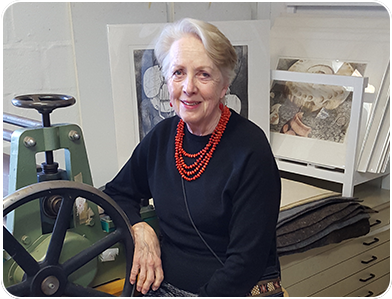 As with most artists, my work has always been an extension of my life. In sharing my responsibility for apartheid with my fellow Afrikaners, I have tried to show the injustice of the regime (Good Friday in Graaff-Reinet,(1990) but have also pleaded for understanding and respecting the views of others (The Inisiates,1987), a pre-requisite for lasting reconciliation and healing (Triptych for the Promised Land, 1998).

Now, in my recent drawings and prints, freed from the “struggle straightjacket” (Judith Mason), I moved from community to individual expressing my personal feelings of aging in the Four Phases of Life Series: Spring, Summer Autumn, Winter (2007) and Melancholia (2007). The four elements of fire, water, earth and air, constitute another theme long favoured by European artists but which is also reflected in traditional African cultures: Transcendental Elements (2007).

Printmaking and especially etching, with its vast repertoire of tactile and textural possibilities, appeal to me. Afrikaans and English literature is another love and I often include texts in my work. For me the historical bond that exists between the printed word and the printed image is a meaningful one and both challenge their “readers” to look closely.